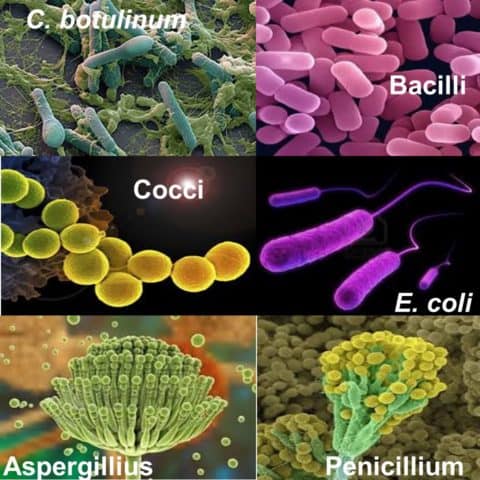 Microbiology is the scientific study of microscopic organisms, often called “micro-organisms” or “microbes”. Although micro-organisms are small, the mass of microbial life on earth is 25 times greater than the total mass of animals. The external surfaces of all animals and plants are covered with micro-organisms, not to mention animals’ internal surfaces. The human body contains about 100 trillion microorganisms.

In the pharmaceutical industry, the major types of micro-organisms of concern are bacteria and fungi. Manufacturers of biological products are also concerned with the presence of viruses in their products.

Some species of bacteria are very hardy. They can live in extremely harsh environments, such as in high salt concentration, acids, or high temperatures.

Viruses are much smaller than bacteria and readily pass through bacteria-retaining filters.

In manufacturing environments where living cells are involved in the manufacturing process, viruses are of concern. For this reason, manufacturers of biological products generally include a virus reduction step in their processes. This may be by chemical means or application of heat.

Because of the difficulty in removing viruses, they need to be excluded from “at risk” products. Typically, materials are screened for undesirable viruses.

Bacteria are usually vegetative cells that can grow and reproduce easily. However, some bacteria and fungi can form chemical and heat-resistant spores when the conditions surrounding them are harsh. They are most commonly found in soil organisms, like Bacilli and Clostridia.

Spores do not grow or reproduce. Instead, they lie dormant until environmental conditions are conducive to growth. When this occurs, a spore will germinate and form a vegetative (growing) cell.

Spores can survive extreme heat, drying, or exposure to toxic chemicals, such as disinfectants. For example, the spores of Clostridium Botulinum can survive boiling for several hours. Most spores can withstand temperatures of 80°C for several minutes, whereas most vegetative (growing) cells are killed by temperature of about 60°C.

Because spores are so difficult to kill, they need to be excluded from product. This is normally achieved by protecting the manufacturing environment from outside dirt and air. As germination may be triggered by brief exposure to heat, water, or by mechanical forces, manufacturing facilities should also be kept dry.

Roles of bacteria and fungi:

Micro-organisms are essential for your health. The normal flora that covers your skin and internal surfaces prevent disease-causing micro-organisms from taking over.

Bacteria and fungi play a vital in the decomposition of all organic matter, returning carbon, nitrogen, and other essential elements back to the soil.

Bacteria and fungi also play important roles in industry, for instance, in the production of food, vaccines, and antibiotics. Probiotic bacteria, which can be found in yoghurt, helps the body remove cholesterol. Yeasts, a type of fungus, are used in the production of bread and alcohol. Moulds, another fungus, make penicillin.

Of the several thousand bacterial and fungal species known, only relatively few commonly cause disease. Others are “opportunistic” and infect people when they are immunocompromised (sick or run-down). Infections such as sore throats, tetanus, cholera, and tuberculosis are caused by bacteria. Some fungal species are responsible for the deterioration of textiles and wood, while others cause diseases like athlete’s foot and thrush.

Difference between bacteria and fungi:

Regardless of how many cells micro-organisms contain, each may pose distinct risks to pharmaceutical product.

There are different ways of classifying bacteria, based on different characteristics they may or may not exhibit.

Bacteria come in many shapes, but the most common are rods (bacilli), spheres (cocci), and spirals (spirilla).

Micro-organisms can rapidly multiply in the presence of stagnant water. This is why equipment must be stored dry.

In addition, topical creams have strict limits on bio burden, since creams are often used by patients on damaged or broken skin. If the product is contaminated, patients may become infected.

To properly control micro-organisms, we need to understand what makes them grow and multiply.

Micro-organisms only need small amounts of nutrients and moisture to grow, which is why manufacturing facilities need to be kept clean and dry.

The growth of micro-organisms depends on the combination of the below factors:

Just like humans, micro-organisms need water to grow. Water is responsible for a large majority of a cell’s makeup, and has roles in nutrition and cellular metabolism.

Temperature affects the growth rate of micro-organisms. Generally, lower temperatures inhibit growth, while warmer temperatures promote growth. Although optimum temperatures will vary from species to species, the pattern of growth will be the same.

The pH range in which bacteria can grow is usually between 4 and 9, with an optimum range usually between 6 and 8. Moulds and yeasts have a broader pH range than bacteria, and their optimum is lower, usually 5-6.

Different species have adapted to grow at different pH values, which is the reason that some bacteria are able to grow in disinfectants and other strong chemicals.

Bacteria multiply by a process known as binary fission.

This means that each bacterial cell divides into two living cells so that the population doubles in number with each division.

The population of bacteria is said to grow exponentially, and will continue to expand until the nutrients run out or environmental conditions change.

How to count microorganisms:

As micro-organisms are constantly multiplying and dying, to get a true count, multiplication must be slowed or stopped altogether.

Since micro-organisms rarely occur alone, estimates must be made. Estimates can be made through a process called Total Viable Aerobic Count (TVAC), which counts the number of colony forming units (CFUs). CFU counting assumes one colony has originated on the media from one cell, and as such, would introduce significant error into the count.

Some micro-organisms do not grow together due to toxicity, or because of different temperature, moisture, oxygen, and nutrient requirements.

How fast can bacteria multiply?

The typical generation time is 30-60 minutes. The time interval (“generation time” or “doubling time”) required for bacteria to divide, and therefore double in number, varies for each species. It may be as short as 15 minutes for E. coli, or as long as 15 hours for M. tuberculosis.

This means that, if growth were unlimited, in 24 hours a single E. coli bacterium could multiply enough to fill a total volume the size of an average factory! This doesn’t happen, of course, because other factors come into play that help stabilize or reduce microbial populations, e.g. changes in oxygen, temperature, pH, and the amount of nutrients.

A population of micro-organisms, when faced with adverse conditions such as disinfectants or increasing heat, will not die instantly. Some of the micro-organisms will die immediately, while others will take several minutes. Some may even survive. The pattern of death is also exponential.

Therefore, enough time must be allowed for the cleaning or sanitizing agent to take effect in order to effectively reduce the number of micro-organisms in the workplace.